Cimex lectularius
This wingless bed bug, a notable blood sucking parasite of man throughout written history, has moved with him all over the world. The bed bugs adaptation to humans is so complete their bites are nearly painless. Bed bugs have been one of the most important urban human pests; they were disliked more than cockroaches, but DDT so effectively controlled bed bugs in the late 1940s that they are of minor importance today. 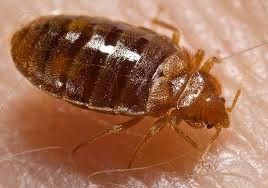 Bed bugs are dark reddish brown, oval and very flat. Adults are almost l/4 inch long and become mature in about four weeks when host blood is available and temperature, humidity, and harborage is favorable. If hosts are scarce, bed bugs can survive for a year without feeding.

Hosts include many species of vertebrates besides man, including poultry, rodents, dogs, and cats. They infest shelters along hiking trails and cabins of summer camps and parks. The surprise occurrence of bed bugs in urban homes often can be traced to these recreation facilities.

Eggs.
Eggs are deposited several times each day in protected places near the hosts sleeping area; in one to two weeks, depending on temperature the warmer the weather, the shorter the incubation time.

Nymphs. Nymphs, tiny and colorless at first, go through five molts taking a blood meal between each one. This nymphal period can last from several weeks under favorable conditions to as long as a year when hosts are unavailable and temperatures are low.

Adults. Undergoing gradual metamorphosis, the bed bugs mate soon after becoming adults. Adult bed bugs prefer humans as hosts; while they have been known to harbor several human diseases, there has been no record of disease transmission. 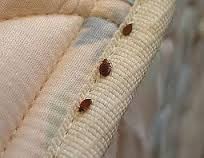 Under normal conditions, bed bugs feed at night. Flat bodies allow them to hide in cracks in beds, bedside furniture, dressers, wall boards, door and window frames, behind pictures, under loose wall paper and in rooms near host sleeping areas.

Habitat Alteration
Since bed bugs have alternative hosts besides humans (e.g., rodents, some birds, etc.), excluding these animals is very important. While it is difficult, infested woodland cabins must be vermin-proofed.