The Smoky-brown cockroach is a relative of the American cockroach and resembles it in size and shape. 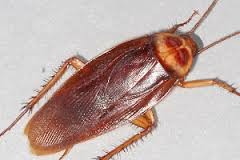 Adult Smoky-brown cockroaches are slightly over 1 inch long, and both sexes have wings that are longer than the abdomen. Their very dark-brown mahogany color is striking; no light markings appear on the pronotum or wings. Nymphs, like adults, are also dark-brown. Antenna1 tips of young nymphs are white, and the base segments of the older nymphs antennae are white.

Eggs. The egg capsule of the Smoky-brown cockroach is large and dark-brown. The female usually glues it to objects in the harborage. An average of 17 eggs are in each capsule; as many as 24 eggs have been found. Nymphs hatch within 50 days.

Adults. The life cycle of a Smoky-brown cockroach is about one year. A large adult die-off occurs each fall. Both sexes fly.

The Smoky-brown roach is a plant feeder, and occurs in greenhouses. While it is mainly an outdoor roach, it is often transported indoors. Populations build up outside homes and enter around doors, garages, and in the eaves of roofs [where they live in gutters and under roof shingles and easily find their way into attics]. This cockroach is very dependent on moisture. With the high humidity of coastal areas, populations can build up and infest every level of a structure.

In the past, flea control in the northern United States consisted of a summer spray inside and treatment of the pet since re-infestations from outside was not common. In the southern states where outside infestations were common, treatment in the yard was also needed. Today flea infestations and re-infestations are common in all parts of the country except very dry areas.