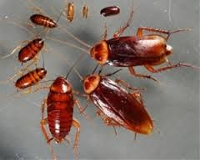 Adult American cockroaches are long: 1 1/3 to 1 1/2 inches. The wings of the male extend slightly beyond the tip of the abdomen, but those of the female do not. This roach is reddish-brown in color and has a yellow or tan band around the edge of the shield behind the head. Often this margin is bright and wide, darkening toward the center of the pronotum. In other cases, the lighter margin is barely discernible, but it is always present on the rear margin of the pronotum.

Eggs. The American cockroach female drops her egg capsules about one day after they form. The capsules are only about 5/16 inch long and 3/16 inch wide, and are sometimes covered with dust, because they are left by the female in out of the way places. [Egg capsules that are clean, dark, and often dropped in the open, are an indication of a high population.] Where climate allows American cockroaches to spend most of their lives outdoors, egg capsules can be found in moist wood. Although females produce egg capsules throughout the year, they produce more of them in the summer. An egg capsule can form in about one week, so from 12 to 24 capsules can be produced in the warm months. An average of 14 eggs per capsule hatch in 30 to 50-plus days.

Nymphs. When they first hatch, nymphs are gray. After their first molt, they are reddish-brown in color like the adults. They molt up to 13 times before reaching adulthood. Depending on temperature nymphs can take from six to 20 months to mature. Mature American and Oriental nymphs can be difficult to tell apart.

Adults. Adults commonly live more than one year, giving the American cockroach an entire life span of 20-21 months. Both sexes have well-developed wings and can fly. The wings of the male extend slightly beyond the tip of the abdomen while those of a female do not.

Most commonly found in restaurant, supermarkets, and other commercial buildings where food is prepared or stored, but they may also invade apartments or homes from sewer systems via plumbing. Large populations of American cockroaches live in warm moist habitats. Within household, this cockroach prefers to live in clutter basements, feeding upon stored paper goods and seepage from around sewerage pipes. They can be found outdoors in the alleyways, dumps, stacked firewood and rotting wood, and in tree canopies. [They winter in landfills of decaying trees at that latitude.] They can be found in boiler rooms or other harborage with water heaters, floor drains, and water sumps.