Of the five most serious diseases in the world, flies, including mosquitoes, spread the organisms that are responsible for four: Malaria, sleeping sickness, Leishmaniasis and filariasis. They also are responsible for yellow fever, typhoid, and various diarrheal illnesses. In the United States, the toll of the worst afflictions — heart attacks, cancer and strokes is annually numbered in the thousands; in the tropics, the dead and disabled from fly borne diseases are counted by the millions.

In the United States, flies are considered more annoying than dangerous; as recently as the turn of the 20th century, however, malaria and typhoid were major health problems.

Flies, the order Diptera, are one of the largest and most dynamic orders of insects. This vast order is characterized by having only one pair of wings. Most flies are also small, soft bodied; often, two large eyes that cover the front of the head. Flies can be divided into two groups; distinguishing differences center around the appearance of the larvae and adults:

In Group 1:
The adults are small — gnat or mosquito-like with long antennae and slender legs. Larvae have head capsules and most live in water or moist soil. 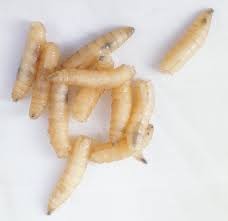 In Group 2:
The adults have stout bodies; their antennae are short or not visible; some are relatively large but usually not long legged. Larvae do not have discernible heads and are often maggot-like. Their harborage varies — they live in water, filth, soil, carcasses, plant tissues or animal tissues.

All dull gray flies about l/4 inch long found inside or even near structures will likely be called House flies. If the identification is incorrect, it probably is not far wrong.

Flies often tell the same story: they frequent garbage, dead animals and manure. Their larvae live in that material. To enter a house, they have flown inside through an open door or window, or they have moved from a dead bird or rodent in a wall.

Both the House fly, (Musca domestica) that lives on garbage or manure, and its close relative. 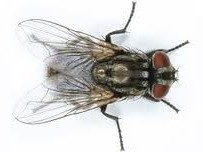 The Face fly (Musca autumnalis) that lives on fresh cattle manure, are about l/4 inch long. They have a dull-gray thorax with dark stripes and a dark, dull abdomen with yellow sides. 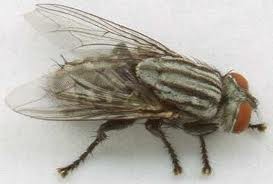 Flesh flies (the family Sarcophagidae) live on meat scraps, dead animals and dog excrement; they are more than l/4 inch long, have a dull-gray thorax with three distinct dark stripes and a gray checkerboard abdomen.

Blow flies (the family Calliphoridae) are about l/4 inch long. Their thorax and abdomen are shiny black, metallic green or bronze, or they have a metallic blue abdomen with a dull thorax. They live on dead animals, meat scraps in garbage, and wet mixed garbage.

The Cluster fly (Pollenia rudis) is also in the family Calliphoridae. It is slightly more than l/4 inch long. Its thorax is covered with gray or yellowish hairs; it has no stripes, Its abdomen is dark gray with light patches.

When any of these flies become problems inside, their breeding site and their larvae will usually be close by. If animals are nearby, investigate for manure concentrations. Garbage cans and dumpsters are often the problem source; even soil where garbage has decomposed will support infestations.

Look for fly sources where buildings are infested. Observe sanitation in the areas where flies are problems.

In favorable weather, House fly larvae mature in 6-10 days and Blow flies in 3-9 days. They live in refuse only from the egg laying to the mature larval stage. Then the mature larvae crawl away to pupate, emerging as adults later.

Emphasize sanitation: Make the following recommendations to clients. [If sanitation cannot be improved, other methods of control will not be effective.] 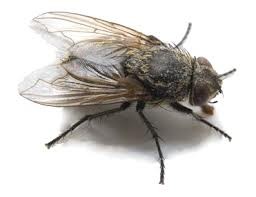 The same flies that enter structures: House flies, Face flies, some Blow flies, Flesh flies and Cluster flies, normally overwinter as adults. In nature, these locations are under bark, in hollow parts of trees or under the bark of logs. They begin seeking shelter at the end of the hot part of summer. If they begin investigating structure walls in this search for winter harborage, their upward movement often brings them to openings under siding, ventilators and weep holes in masonry, cracks around windows, wire penetrations, wall voids, and openings around the roof. Unused attics are good overwintering sites.

Flies, Elm Leaf beetles, Boxelder bugs and female Paper wasps (all hidden in attic cracks) will begin flying to windows on warm winter days. They often make their way down through closets and chimney cracks into living spaces of the house. This same behavior takes place in office buildings, hospitals, and other structures.

Phorids or humpbacked flies are about the same size as fruit flies or a little smaller. They are dark brown and have a humpbacked appearance — a visual effect caused by a small head located low on the front bulge of the thorax. Wing venation consists of several short, thickened veins on the fore margin of the wing near the attachment to the thorax. These veins do not extend to the wing tip, and other veins are weak or nearly invisible. Phorids run in short jerks. 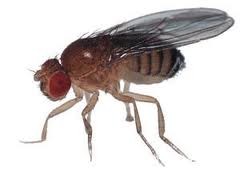 These flies become problems when they infest decomposing plant or animal matter. Buried animals, garbage, or broken sewer lines support large numbers of phorids. Phorids also infest bodies in mausoleums. Adults are able to emerge from the underground infestation site upwards through several feet of soil. If broken sewer lines are under buildings, phorids can come up through cracks in concrete floors or around floor drains. When water and sewage wash out cavities in the soil around the pipe, immense numbers of flies are produced. 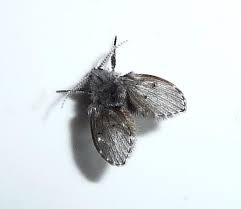 Moth flies are about l/8 inch long. Their dark color comes from tiny hairs that cover the wings which are held in roof-like fashion over the body. Moth flies have long, drooping antennae. Larvae live in the gelatinous material in sink drains traps and sewers. Where sinks regularly overflow, these flies build up in the overflow pipe. When drain traps of sinks, commodes, and floor drains dry out, large numbers can enter dwellings from the sewer. Drain traps should be cleaned mechanically or with drain cleaners. Without larval control, adults will continuously emerge.

Midges look very much like mosquitoes but do not bite. Midge larvae live in water, especially in quiet, still water. Adult midges are the driving force behind some spider infestations on buildings and monuments (see Orb Web spiders, Chapter 3). The adults fly to lights and enter dwellings through gaps. Management is site specific; pesticides are generally not useful. Manipulating lights will reduce midge attraction. As part of the pest management plan, note flight periods and times. The larvae of some species of midges indicate a larger pollution problem.

SUMMARY
Flies, insects with complete metamorphosis, in the great order Diptera are characterized by having only one pair of wings. These insects carry diseases and are responsible for millions of deaths each year because of their disease vectoring ability — particularly in less developed countries. In urban areas, flies contaminate food and people in restaurants, hospitals, homes. They are annoying indicators of sanitation, structural, and cultural problems.