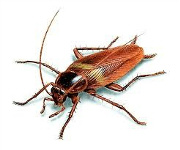 Adult brown-banded cockroaches are the size of German cockroaches — about 1/2 5/8 inch long. The female is a little longer than the male. Her wings are reddish-brown to dark-brown, and a little shorter than her broad, rounded abdomen. The male, slightly less than 1/2 inch long, has wings that are dark-brown at the base but light-brown at the tips, which are slightly longer than the tapering abdomen. Both sexes have a light band behind the pronotum at the base of the wings, and another or partial band about 1/3 of the way back from the pronotum. The pronotum is dark-brown with very light side margins and never shows two stripes as the German cockroach does. Nymphs are dark with two very light bands separated by a dark band just behind the pronotum. These nymphal markings are more obvious than the banded markings of the adults.

Eggs. The brown-banded cockroach female forms an egg capsule and carries it less than two days when she glues it to an object in the harborage site. The capsule is very small, only about 1/8 inch long and a little less than 1/8 inch wide. It is oval and light tan to brown in color. The female usually glues these in clumps underneath furniture, behind kitchen cabinet drawers, and in corners inside cabinets and cabinet frames. These capsules hatch in around 50 days; they take longer at cooler temperatures (e.g., up to 95 days at a room temperature of 72 degrees Fahrenheit). A female may deposit 14 egg cases in her lifetime; 13 to 18 nymphs can hatch from one egg case.

A parasite of the brown-banded cockroach egg capsule is a small wasp, Comperia merceti. A female wasp seeks dark areas where she can find brown banded cockroach egg capsules in which to lay her eggs. The tiny wasp larvae eat the roach eggs, and then emerge from the capsules, fly to windows where the sexes meet and mate — and the cycle begins again. This wasp parasite has been used as part of a cockroach pest management program.

The nymphs are readily identified by two yellow bands that cross the upper abdomen. Nymphs molt six to eight times before becoming mature for a total of five to six months at around room temperature. At higher temperatures the nymphal period is nearly halved.

Adults. Adult brown-banded cockroaches live about six months past the nymphal stage. Males fly readily, as can be seen when lights are turned on during their foraging periods. The females do not fly.

Brown-banded cockroaches, like German cockroaches, build up the highest populations in kitchens. Their tendency is to flourish in apartments and homes where high temperatures are maintained. They frequent high cabinets and favor areas near stoves and warm motors, such as those in refrigerators, electric clocks, light timers, televisions, and radios.