The German cockroach is not only the cause of the largest number of phone calls requesting pest control, but also represents the largest number of control failures of any household pest. It is most successful at infesting human structures and with standing pest control activity. Pest control technicians will need to double their efforts in analyzing every German cockroach infestation, and should be prepared to use more than one technique to bring the infestation under control. 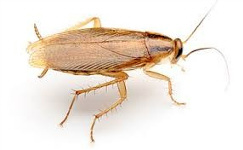 Adult German cockroaches are l/2 inch long or slightly longer. Males are grayish-tan with two black stripes on the pronotum, and have a tapering abdomen. Females are usually darker and their abdomens are more rounded. Nymphs are sometimes not recognized as cockroaches; they appear quite different than the adults. After molting, they will be ivory white for several hours before turning dark. People who see them at this time often think they are albino cockroaches. [Actually, such observations mean that the cockroach population is so large, the nymphs cannot find unoccupied spaces in which to hide and molt, for they normally leave their aggregations to molt in private.] In the first stage, nymphs are very dark. In later stages, a pale tan stripe appears down the middle from front to rear. This stripe divides the nymphal markings into two dark, long stripes. The stripes remain as two dark streaks on the adults pronotum, while the rest of the body is covered by the tan or brown wings.

Eggs. The egg capsule of the German cockroach is about 1/4 inch long. Half of it protrudes from the females abdomen. It is carried in this way for three weeks until it is dropped, about one day before the eggs hatch. The drop usually takes place in a secluded portion of the infested habitat. [If the egg case is dropped much more than one day before hatching time, the young die.] Each egg capsule contains 30-40 eggs. Altogether, the female will produce from four to eight capsules in her lifetime. Four capsules will have a full complement of eggs, but subsequent capsules can contain less. When the female goes into safe hiding, she takes the capsule with her, reducing exposure to possible harm. In extreme danger, she will detach the capsule and flee. The capsule has a relatively impervious surface to protect its eggs. It does, nonetheless, receive moisture from or give moisture to the female. In extremely dry atmospheres, however, the female will abort the egg capsule. In all large infestations, there are egg capsules present. Even if the cockroach population is eliminated, as many as one in every twenty egg cases can still hatch.

Nymphs. The eggs hatch when the nymphs inside create pressure that splits the case and allows the young to escape. They often will stay around the opened egg capsule after hatching. Then, as they develop, they molt six or seven times before reaching the adult stage, Females often have one more molt than males. When molting, nymphs are very soft and vulnerable.

Adults. Adult cockroaches emerge from the last nymphal molt fully winged. They join a nearby aggregation made up of other adults and larger nymphs. The aggregation is held together by a very short-range odor called the aggregation pheromone. The German cockroach produces more eggs and has more generations per year (three to four) than other cockroaches; thus, a troublesome infestation can develop rapidly after the chance introduction of a few individuals.

Aggregations of cockroaches live in areas of high humidity and nearby food. They will find harborage into which they can fit closely. As the number of roaches increase and favorable harborage is filled, roaches are forced to leave the aggregation or remain in less favorable harborage. They will find these new sites during their foraging periods just before dawn and after dark. During the day, adults and nymphs hide clustered together under, around, or even in the walls of appliances such as stoves, refrigerators, and dishwashers; around sinks, especially in the dead space between the sink and wall; beneath or around the water heater; under, inside, or in cracks around cabinets, closets, and pantries; and behind baseboard molding. 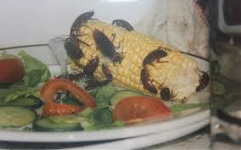 Mating. Females do not respond to mating behavior for more than one week after becoming adult. Proximity for mating is especially important, as males and females have to touch antennae and exchange sex pheromones to initiate mating. After mating, females feed intensively for several days, and then seek secure hiding places where they can be safe with their egg capsules.

Such seclusion means that females with egg capsules feed less frequently and are exposed to pesticides less often. Preventive pesticide applications are likely to be less toxic by the time female roaches come in contact with them. Clients often report seeing no adult roaches after a technicians last treatment, but later will observe little black ones. The client is reporting the success of the females with egg capsules that were deep in harborage and did not come in contact with superficially or inexpertly applied pesticides.

Foraging. The foraging pattern of German cockroaches is much less random than one would expect. The roaches leave their harborage and usually go to the first perpendicular surface they find, where they stop, turn, and move along the intersection of the two surfaces (usually a floor and a wall). As one can imagine, food crumbs often wind up in the same places that is in wall moldings, corners made by walls, stoves, counters, canisters, etc. The most convenient harborage, in and around refrigerators, stoves, under sinks, and undisturbed cabinets, provides both protection and food. The most favorable humidity level is found in kitchens with sink traps, leaking faucets, standing water, wet sponges, etc. A bathroom is popular because of its toilet bowls, sinks, wet wash cloths, and sometimes, water heaters. While there is less food in bathrooms, food areas are usually nearby or available through holes around plumbing pipes. These pipes provide additional harborage and areas for population expansion into adjacent rooms or apartments.